To find a solution one first needs to understand the problem. The popular reported problem is over-borrowing by the US, Western governments and their citizens. This certainly was a trigger. However a very current problem is “confidence,” the chief economists and bankers in the USA have no confidence in the future due to Medicaid, Medicare & Social Security payments. (The US equivalent of the UK National Health Service and government pensions)

In 2010 these liabilities (payments that need to be paid) cost about $1.5 trillion; this year the USA received $2.2 Trillion in federal tax revenue, leaving $700 Billion for all the rest of its commitments, which cost a further $2.2 Trillion, resulting in a loss of about $1.5 Trillion, which needed to be borrowed to balance the books.

It’s an election year in the USA and as such there is not a lot of talk about austerity, however next-term austerity will be introduced, as the large tax cuts President Bush made just before 9/11 are due to end, as such whichever party is in power need not make a policy to increase tax, but rather they should make no policy to extend the tax cuts in full.

(Retrospective Note: This event happened and was well publicized, however somehow the US managed to entangle this decision with other tax initiatives, and it got dubbed “the fiscal cliff” where it was considered allowing all taxes increases and budget cuts to apply at the same time would force a recession. As such only a tax rise for the super rich was implemented. Which considering the circumstances was a fair decision, however it has enacted the CBO’s Alternative Fiscal Scenario, as seen to our right, this scenario is no longer speculation, rather fact)

Since the beginning of the 20th century governments have calculated both growth and stagnation in their economies. In general the USA has seen steady growth for about 10 years, then a recession for a year or so, followed by more growth. So considering histories, many presume the current stagnation will end in due course. If so, the US would increase its tax income by about $500 billion, thereby lowering the amount needed to borrow to about $1Trillion.

If one considers the USA austerity policy in terms of not necessarily lowering this figure, but rather not increasing it, then the concept changes. $1 trillion a year, at an interest rate of say 3% would mean an increase in cost to the USA of $30 billion each year.

Over the last 10 years despite 4 years of stagnation, if we factor in inflation and currency values, all the businesses in the USA increased their sales by an average of 1.8% each year. Last year all the US businesses generated $15,294 trillion, 1.8% of that figures equals $275 billion. A good growth time federal tax yield is 18%, as such on a good year the US federal government, in business terms, increase their tax yield by an extra $50 billion each year.

So if the USA austerity measures manage to keep borrowing at $1 trillion incurring a $30 billion expense, while increasing its tax yield by $50 billion, effectively year on year the US will be $20 billion better off. So one could rightly ask, why are the economists saying there is a problem, why is there no confidence?

The problem is that in about 10 to 15 years, due to the increase of the aging population, the increasing cost of medical technology and pharmaceutical bills, Medicaid, Medicare & Social Security costs, are going to double, as such the idea that the USA austerity measures can freeze borrowing at $1 trillion a year is not possible, as in 10 to 15 years an extra $1.5 trillion is required, which if borrowed at 3% would add an additional $45 billion, resulting in the USA making an effective annual $25 billion loss. This loss in academic terms is called an increase in Public Debt vs. GDP (Gross Domestic Product). (Computations are based on all the goods and services sold). This ratio is the yardstick for economic success or failure.

Here is a graphic that sums it up nicely, the light blue dotted blue line representing the CBO’s (Congressional Budget Office’s) predicted scenario, the dark blue representing their politically toxic austerity recommendations and tax increases. (The tax increases that did not happen on the 1st January 2013)

I say politically toxic as any government enacting a decrease in Medicare & Social Security spending would effectively be breaking the law. The law says they can increase taxes to pay for it, but they can’t decrease payments, as Medicare & Social Security are for all intents and purposes pension retirement plans. In essence US Citizens have been forced to pay a considerable amount of money into a pension plan all their lives, only to discover the pension company has invested the money carelessly and is going bust.

Where was the money invested?

It was invested into itself: The USA total debt is $15,670 trillion, however the USA public debt (owed to countries, banks and private investors) is only about $11 trillion. The balance of about $5 trillion is the pension fund spent on wars and electioneering (making promises to win elections to the long term detriment of the country).

An interesting website to look at is the USA debt clock: http://www.usdebtclock.org/ at the bottom it really spells out the trouble the USA has with Medicare: Medicare Liability = $84 trillion, Prescription Drug Liability = $21 trillion and climbing. Social security however is only $16 trillion, which sounds like a lot, but in comparison to the combined medical liabilities it’s close to insignificant. Solve the medical problems and all else will fall nicely into place.

In 2007 Ben Bernanke, Chair of the Federal Reserve was asked: How urgently should the U.S. put plans in place to address its budget challenges? His reply: “The longer we wait, the more severe, the more draconian, the more difficult the objectives are going to be. I think the right time to start was about 10 years ago”…… Now it’s 2012 and it’s crunch time,

America Butterfly Question, AB1: Under the premise that the information presented is accurate, do you feel, if the US Medical liabilities were absorbed via corporate responsibility and in addition by the 2040’s another initiative was enacted that resulted in the US becoming far less reliant on fossil fuel it would restore confidence in the US long term economy?

So what is the solution?

The American Butterfly solution is simple enough in theory. It’s only a matter of time before there is an on and offline trade goods and services network as popular as Facebook’s social network. In the new era of the communications age, no one can stop this, all one can do is try to get there first and use the money responsibly. Whoever owns such a network will have more power that any financial institution, or for that matter, any government. However, unlike Facebook, the network to be entitled S-World/Buinessbook is not owned by any one company, it is effectively owned by all companies connected to the network.

If that network were to make a sophisticated plan to cover the USA Medicare and prescription drugs liabilities, it would be doing a great service to the USA. As such, if acclaimed by economists and loved by the masses, the network could ask for and be awarded a few legislative concessions, which would guarantee success. Two concessions are currently put forward.

First, with the promise of a carbon footprint improvement, a relaxation of property development zoning conditions occur, including the ability to rezone farmland for residential and commercial purposes.

Second, corporate tax exceptions for all that use the networks financial software. This may at first seem like a big consideration, however if you go back to the USA debt clock and look in the top right corner, you will see corporate tax accounts for less that 8% of the US federal tax yield, and under 4% of all tax revenues. It makes little money and many argue it is a deterrent to making profit. Certainly it encourages both tax avoidance and evasion, which in time lowers returns on the more profitable payroll and income taxes. For all intents and purposes corporation tax is a false economy; testament to this is the fact that governments across the world are currently reviewing its need. As soon as one major economy relaxes it, businesses will en masse move to that country, until the rest follow suit.

The corporate tax scenario is what I call “a circular event” influenced by my interpretation of “The Butterfly Effect”. In essence, analyzing the cause and effect of one action on another, then another, looking for a path leading back to and enhancing the initial event or transaction. In this scenario: The network takes care of the US Medical bills, in exchange the USA offers corporate tax exception to companies on the network, so more companies join the network, as such, the network makes more money and can afford to pay for the US Medical bills, the cycle repeats going round and round, more companies, more capital to absorb the cost of US federal medical liabilities.
While fossil fuel dependence is rarely mentioned as an economic threat by the CBO and leading US economists, it is an equal or greater threat. Initially as global usage increases so will its price, as the stocks start to deplete, its price will rise again, and when it’s gone, it’s gone. Talk of nuclear fusion is a gamble, possibly even a dangerous gamble; the process of sustained large investment in solar and other alternate energy sources needs to start immediately.

An initiative to cover the USA’s medical bills will see immense gratitude from their government and will of course be popular with the people, its popularity, however, tainted by the need for it in the first place. Green energy however not only solves economic problems, it helps to solve Global Warming, and as such the initiative will gain public support en masse. As such a second circular event intertwines with the first:

Here is a graphic that highlights the two continuous circles, the first of five implanted over a “butterfly effect” graphic 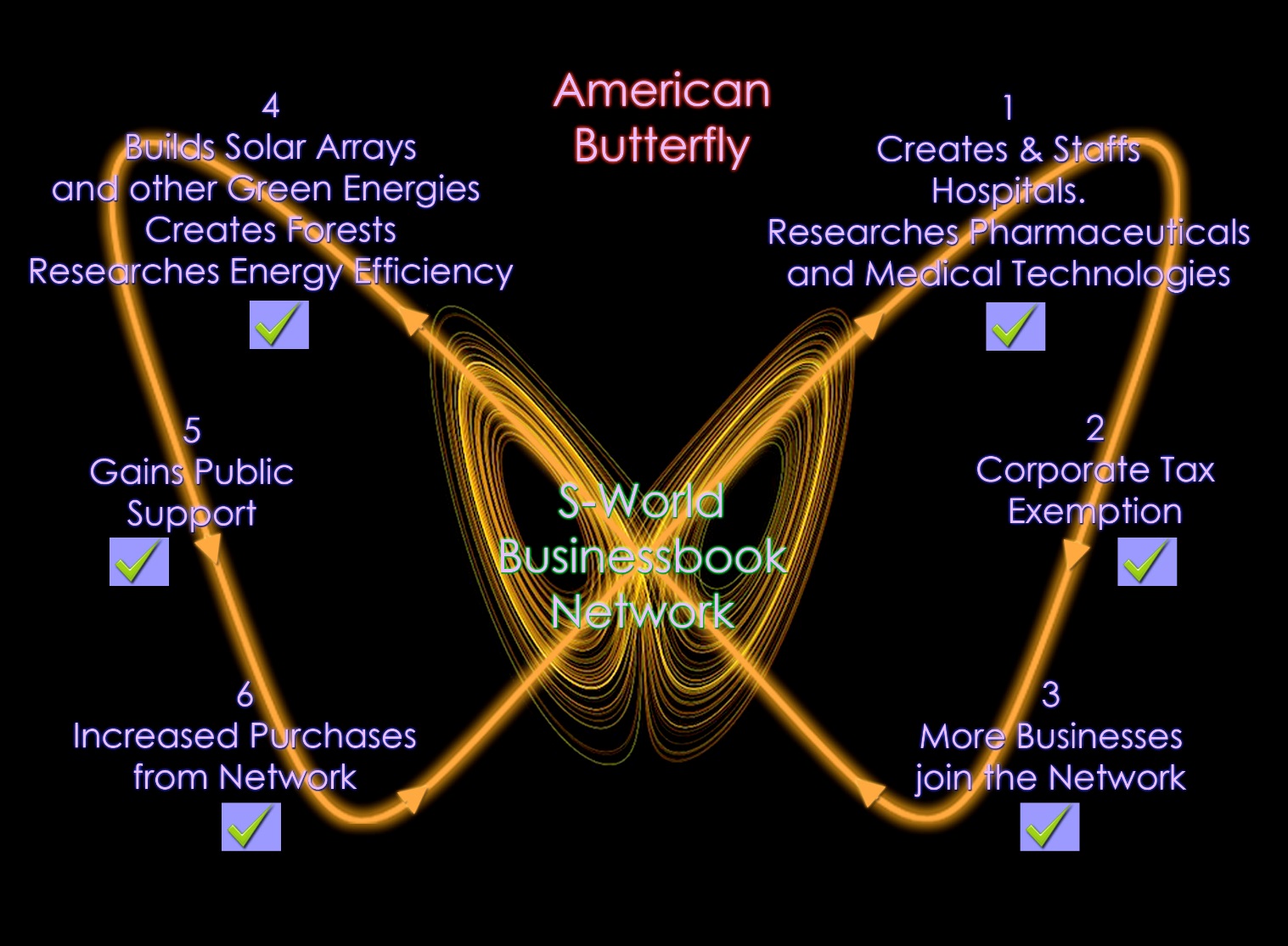 America Butterfly Question, AB2: Considering in 2010 corporate tax only generated 4% of US tax revenues whist Medicaid and Medicare cost 34% of the Federal Budget, would it make sense to give a corporate tax exception to companies that absorbed the 34% cost?

To the right we see a more complex circular image of “the butterfly effect”, a fundamental building block for the PQS economic software (Predictive Quantum Software). Imagine if you will as above, a two-dimensional representations of millions upon millions of companies and their staff plotted in such a manner as to optimize the flow of money, and objectives we wish to achieve.

Then imagine a three-dimensional image similar to that shown below, the third dimension repenting time, the future, so one can look to the future and assess the future objectives one wishes to achieve in relationship to current events, the most obvious example being good PR.

Given the opportunity, one of the first brainstorming exercises will be to make a huge blow up of the image below and have everyone start sticking post-it notes on it, looking for other circular events. 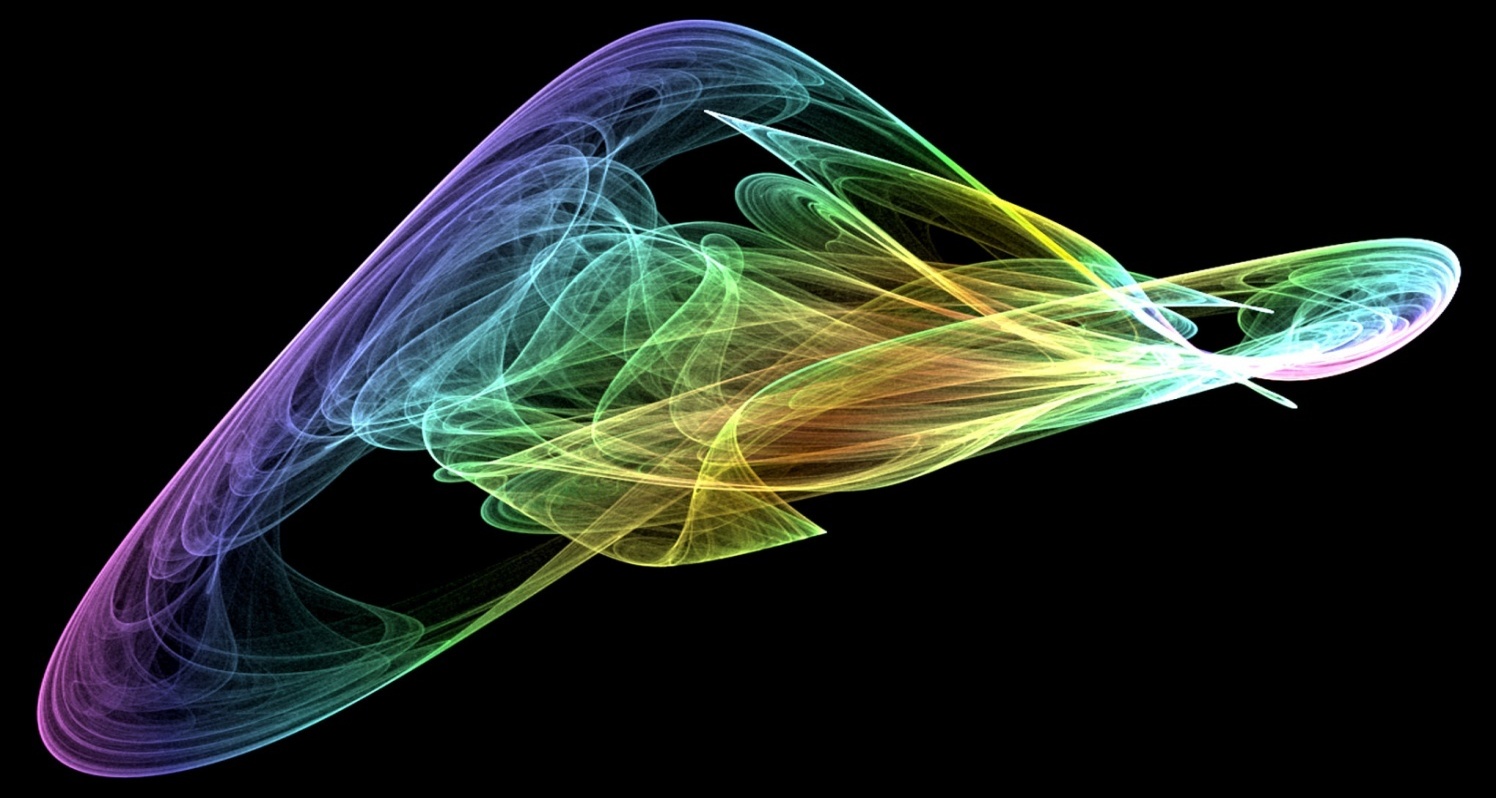 In Cape Town 2009 at my team’s regular work shops with the “En Lighten” braining group we used this method, to inspire “The Facebook Gift’s Application”. A simple option added to Facebook’s happy birthday reminder, offering a gift service and the further option via a year planner to send gifts automatically.

One can see the prototype via this link http://www.s-world.tv/Facebook/home.html which is well worth following as it demonstrates how, given a competent supplier network one simple idea generates much profit. All who have seen it said they love it and would use it, as such due to its popularity it opens the door to Facebook opening a full e-commerce service.

By adding a direct retail division and including the profit made by the suppliers’ significant profits are forecast, as are presented in the penultimate chapter.

The “S-World Virtual Business Network” is expected to eclipses such figures.