This was the tipping point that paved the way to this chapter “16 Points of SUSY Similarity.” This was in essence the 16th point. It’s quite amazing how the simplest of principles from Supersymmetry can make such a difference.
After the 4th network within a string Baby POP requires networks to make $500 Million in profit. In general, each Baby Network will be designed to have at least 10% of its companies, on M⇔Bst “Suppliers Butterfly” contracts. Which in after four years it should produce $196 Million in profits. Added to this are the profits from the other 90% of businesses, which should generate at least 40% of investment money, which would be $1.8 Billion x 40% = $720 Million.

So as a base forecast for an “inner string” Baby Network, we add the $150 Million from operational profits, the $196 Million from M⇔Bst “Suppliers Butterfly” businesses, alongside the $720 Million from standard businesses which equals $1.066 Billion. On top of this, we would expect various profits from technology companies, albeit, the benefits will vary from network to network.

The profit made by an “inner string” Baby Network can of course be spun. The RES equation and the technology profits increasing “expected” earnings into the $1.5 Billion area.

On the right we see a graphic for the rather grandly named:

Along the top, we see a possible 2040 forecast for the profitability of a completed Baby POP string of networks. For the Mother Network, considering the “Suppliers Butterfly” shows that in 2036 the annual profit margin for a M⇔Bst “Suppliers Butterfly” business in relation to the original investment rises from 98% to $429%. The collective $196 Million from supplier companies expected in 2018 rises to $858 Million. Technology profits are also expected to rise, as are all profits over the 22 years.

In light of this, by 2040 an average Mother Network is displayed as generating $4.6 Billion. After which we see a steady decline in profits over the next five or six networks, as technology profits are lower and the more lucrative tenders are possibly snapped up first (Albeit, there is a countermeasure being considered to negate this).
From the 7th network onwards a hit or miss pattern is displayed, indicating the element of chance that would be involved in the process. Please note in red, the three sub $1 Billion networks. Officially this should not be possible. But we need to account for the law of “shit happens” so three sub $1 Billion networks are included for safety and to keep with the “lowest probability” tradition.

We see the lowest earning network is generating $600 Million, which as far as Baby POP is concerned is fine. But for the businesses themselves, looking at half their profit going to operations and RES initiatives, it would be seen by some as a hindrance (Note, the last network “The Boat” is so strong due to continuous Baby POP investments). 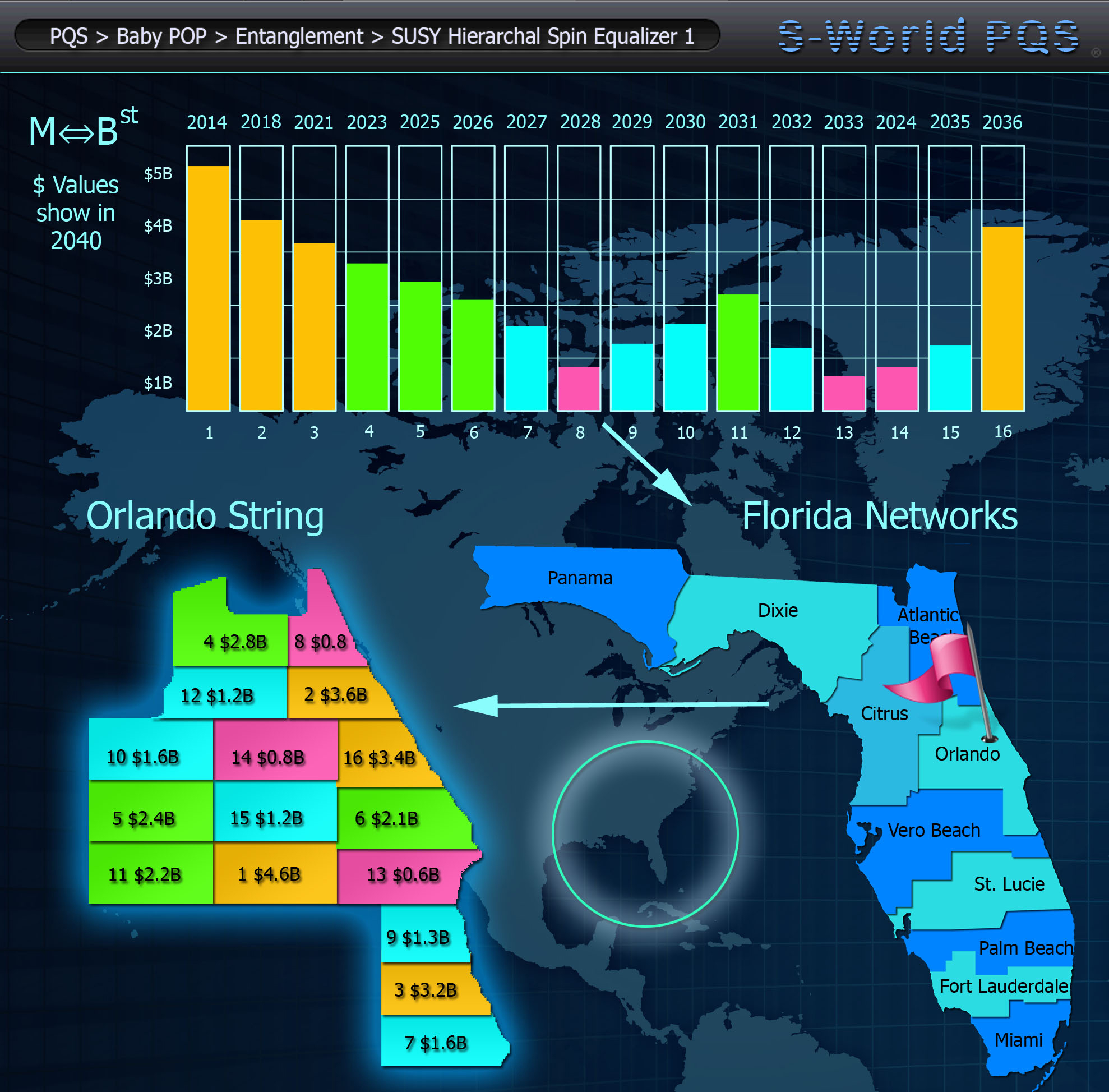 At this point, to help balance the books, we borrow a technique from Supersymmetry.
But before we do a quick word on the map, on the bottom right we see the “Florida Networks,” separated into 10 approximate 6000 square mile territories. These are to be created by the two phases of 512 US Mother Networks between 2014 and 2017 (presuming a 2014 start).

Once a Mother Network is created within a catchment area it creates 16 subdivisions, as show on the bottom left map “Orlando String”. Within this map you see the 16 territories of the 16 networks, within a completed Baby POP String, serving an approximate land area of 380 square Miles (Half the size of Surrey, twice the size of Barbados).
As you can see on the Orlando String Map, in terms of profits equilibrium, we are almost in complete chaos.

Over time, various ideas on how to equalise the vastly different degrees of successes and profit that may befall an individual network within a string have been considered. All rewarding various degrees of minimal success, until I saw a three minute U Tube clip on SUSY, courtesy of Jerome Friedman.

Supersymmetry suggests that for every particle there is a partner which has the opposite spin symmetry. This solves the so called hierarchy problem which assists in closing the gap in energy scales. The grand unification scale is about 16 orders of magnitude beyond the electroweak scale, where after, within the Planck scale, gravity and quantum theory have to come together. Hierarchy assists SUSY to bridge what most physicists feel is an un-intuitive and unnecessary amount of fine tuning within nature.

Supersymmetry is a broken symmetry, as the super symmetric particles do not have the same masses as their partners.

In other words, and taking reference from a little more research, within supersymmetry, balance is maintained by the largest particles twinning with the smallest particles. It is a principal that goes hand in hand with calming the jitters between Quantum Mechanics and General Relativity.

This was a “Lightening Bolt” of inspiration.

We need to entangle the strongest and weakest networks within a string.
And, as an afterthought…do it in such a way that it does not duly inconvenience the business owners in the stronger string.

To our right, the graphic says an awful lot in very few words:

By annually partnering the strongest and the weakest networks within a string and by entangling them together we solve and will continue to solve the hierarchy problem within the string. Smoothing outputs and adding to the predictability, far more than any previously considered initiatives.

If we take the extreme example where the Mother Network generating $4.6 Billion is entangled with, and Network 13 which only generates $600 Million, we consider ways in which the stronger can help the weaker.

One idea would be, for the stronger network to pick up the slack in terms of the operational, medial and alternate energy expenses. At the same time the Mother Network could divert some of its internal RES, at a QE score closer to 65% a token $400 Million would generate an additional $260 Million in profit for Network 13. Another possibility is the Mother Network picking up the POP payments, allowing Network 13 to concentrate all its profits into RES and Internal Stimulus, to assist in its growth.

Any combination of these three measures are more than enough to generate extra growth in the weakest network, until it is happy to stand on its own two feet. They are after all, just babies. 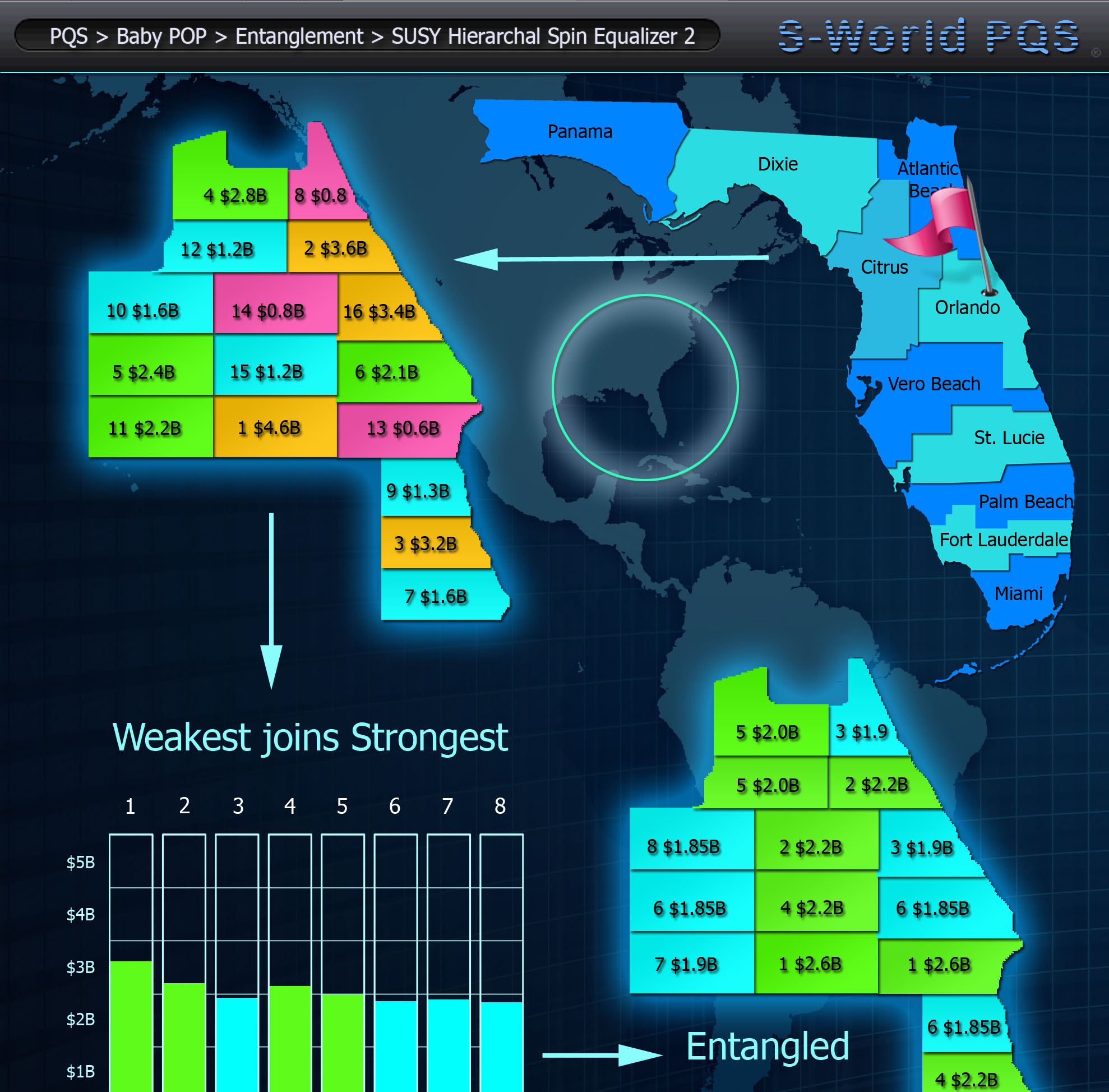 The original POP directive was to organise individual networks’ into boxes of profit close to $4 Billion. By copying one small detail from Supersymmetry, that goal gets a lot closer.

The very same system could later be used on a larger scale. As the Orlando string will eventually form a cube of 8 with its neighbours. Within this cube, the same system could be adopted. After this, the 8 cube will at some time attach itself to its neighbours to create a 64 cube, and so on and so on. Using this type of reasoning, smoothing the profits out within all 8,192 cubes within the US Network and from there the Global network should be simple enough.

This action solves another problem as it brings the complete Network String back into a unit of 8, so a perfect cube.