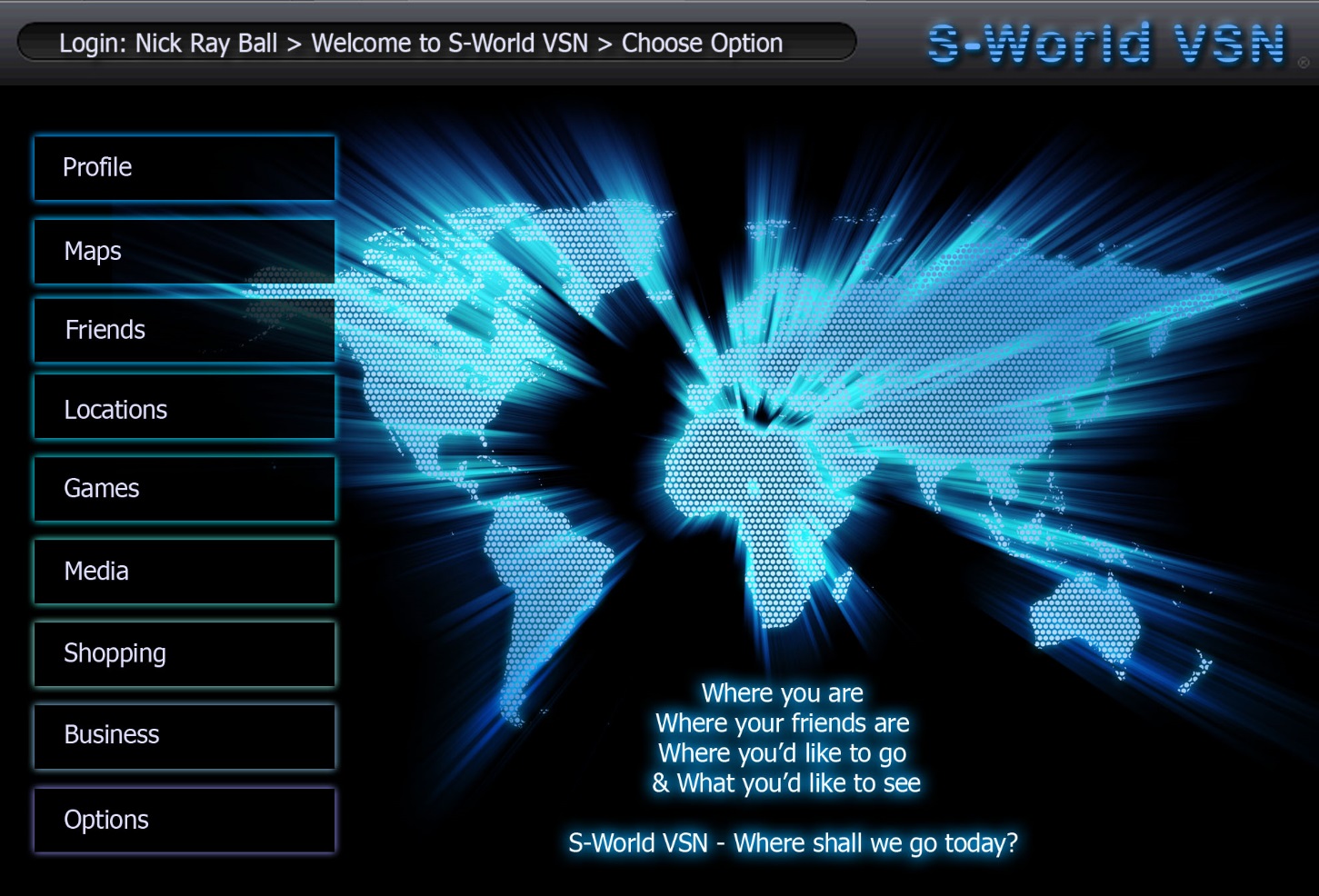 Alongside Facebook Gifts, the following S-World software, travel and real estate concepts are covered in detail within the concluding two chapters of this book, and various chapters on the www.s-world.biz website.

Much like Facebook gifts, the S-World environment S-World VSN (Virtual Social Network) is at its heart a simple concept, in essence the internet viewed via a 3D simulation of the world, popularized by the ability to see where your friends are via their cell phones GPS’s, and the ability to “teleport’ (zoom) to their location seeing their Avatar within a 3D virtual representation of their location, where one can look and walk around seeing all that can be seen. If one’s friend is lost, one could even give them directions.

In S-World, everything is as it should be except the shops, which change to the S-World and Businessbook’s member’s shops. Once a shop is entered one can interact with the company’s sales staff, via their Avatar or Skype. Or just browse a sophisticated display of the company’s services or stock displayed, photographed, filmed and rendered in a superior fashion, for little or no cost by the media teams that support the network. In retail, for instance, instead of a photograph of a dress, movie clips on the catwalk and various locations are presented. For travel and Real Estate, a detailed 3D walkthrough of the venue is available alongside photographs, reviews, client ratings, engineer’s and architect’s plans. 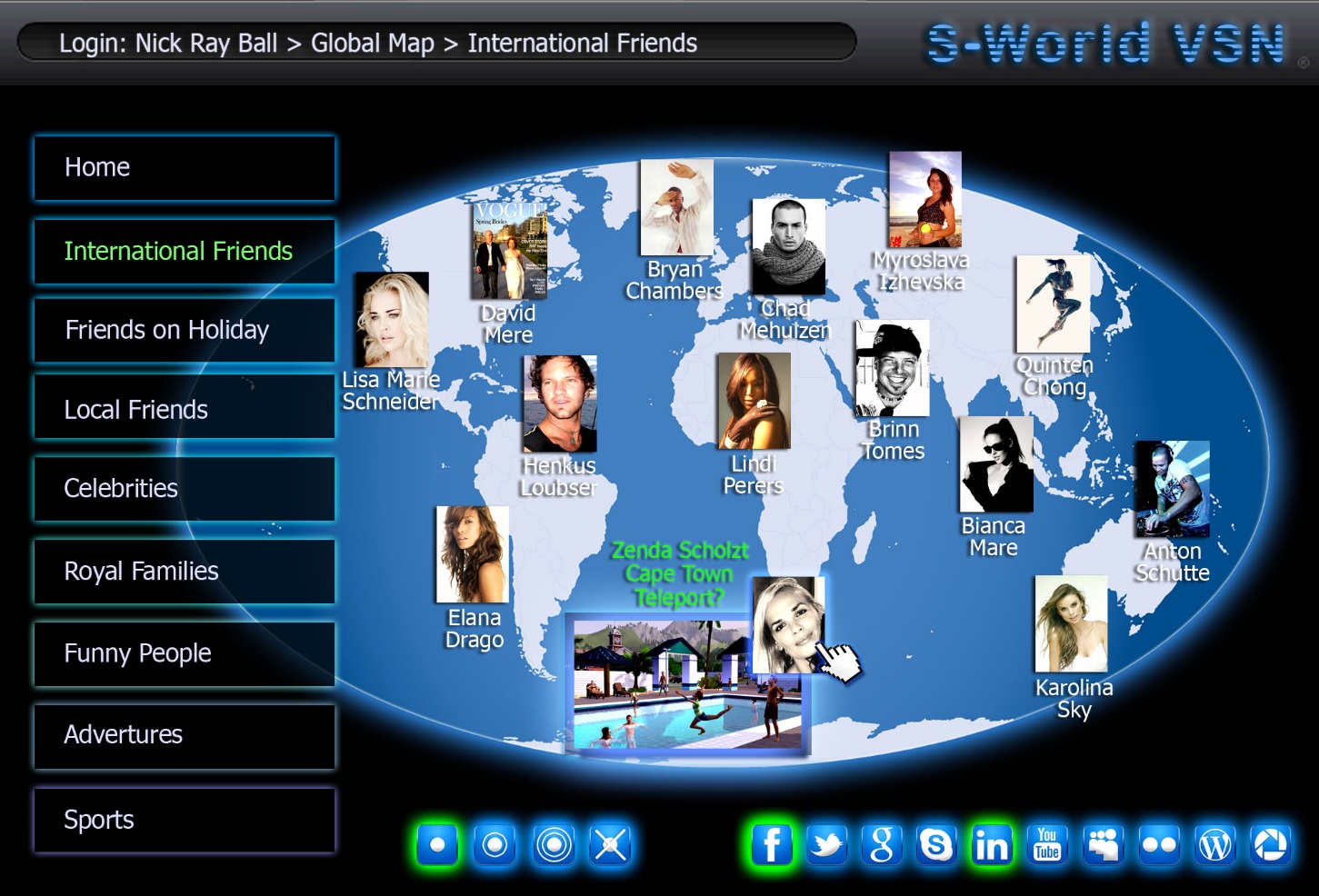 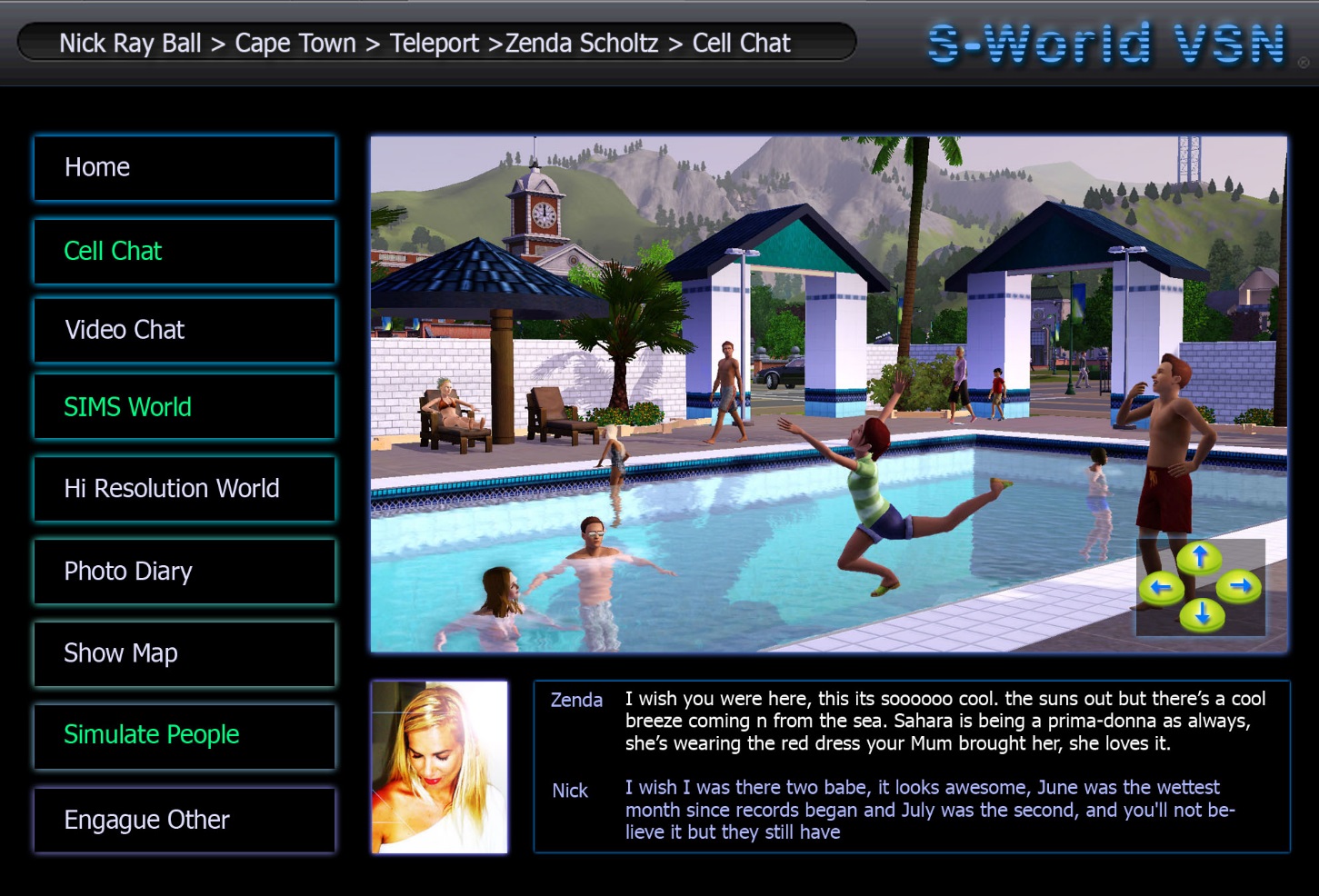 Whilst the gimmick of the virtual world is walking into the shops, the shops could be accessed by many portals, Facebook, websites, search engines, smart TV’s and smart phones to name but a few.

All goods sold on the network via S-world, Facebook gifts, S-Web or other internet portals, are rated by clients. Poor ratings see product lines or accommodation venues dropped, thus the network becomes and incorporates a “per human experience” search engine.

The voting panel is accessed via the S-World profile page, which can come in many forms, its default a 3D room with various doors for various actions, once inside one has access to all products and services purchased presented in a engaging manor. As an attractive incentive, members S-World retail credits are given each time a vote is cast. In addition to this, many staff and companies on network are impressed by profit share and dividends, which are paid in the form of network credits, and can be used to buy anything from houses to ant farms. To further incentivize the voting until previous votes have been cast new credits can not be used.

There are many factors making the voting system very hard to hack and manipulate. The most obvious being, if one does not buy a product, one can’t vote on it. Voting is often a tiresome process thus votes will not be detailed, just a simple choice of, poor, good, or excellent. Various safeguards protect against “luck of the draw” votes, negative people vs. upbeat people’s votes averaged over time.

All search engines are desired as primary partners, who receive payment for each purchase made via their introduction. As goods are rated by humans, search engines can happily and fairly rank high vote scoring S-World & S-Web affiliated websites above all others.

While S-World is designed to replace the e-commerce on the internet, stand alone websites for retail, travel, real estate, and services are far from ignored.

S-Web provides attractive database-driven free websites, offering many formats and designs. Clients simply upload product pictures, write a description and add prices. If a company already has a database- driven website the databases are synchronized. The main financial advantage for all is the ability to add complimentary stock and services from any other company on the network, taking a commission each time someone makes a purchase. The process also works in reverse; other companies on the network can choose to display and sell your goods and services.

There is another contingent to the S-World e-commerce family: S-World UCS was first envisaged in 2004 it combining a tutorial simulation, in the form of a colonization game, which, when mastered, allows one to conduct real business.

Put together Facebook gifts, S-World VSN, S-Web, S-World UCS and the “per human experience” search engine and one has every right to say the combination will take a big bite out of e-commerce market’s share, especially considering the good PR and branding. The internet is a hit or miss unmonitored devise, there is little point reinventing the wheel, unless the wheel is square. The internet is like a square wheel. S-World & S-Web improves the experience and representation. The “per human experience” search engine monitors and so improves the quality of goods and services for the consumer, making the square wheel circular, with the exception or rogue traders and cowboy films, every one wins.

S-world is not designed only as an internet and smart phone device. Over the next few years smart televisions will become the norm. S-world is designed to become the industry standard operating environment. Not only is S-World a great product, the overall network from the start has made provisions for the creation of many localized TV series, and high-budget series and films each year. The larger the network, the more media created.

Current Media Company’s essential to both positive PR and the goal of becoming the industry standard operating environment for smart TV’s are included in the share options available for ownership of S-World alongside the technology companies and electronic communication devices manufacturers.

There is no individual company that will own S-World. S-World will be owned by all that help to build and promote it. All that is sold on the S-World network is from partners, so the financial aspect is simple; the exact mark up/levee/commission varying from industry to industry, profits to be split between the partner companies that create S-World and the referring entity, be it a search engine, a media company, a TV manufacturer, or the browser on a computer or smart phone.

Currently about 20% of holidays are booked on line. About 50% of people choose their destination via the internet, then book through a high street operator, largely for safety reasons.

Tourism accounts for about $900 billion each year, and business travel seems to be higher. It certainly is in the USA, total global travel estimates are about $2.5 trillion, 3.5% of Global GDP, a percentage not to be taken lightly. Once again, there is no point introducing a system if it is not an improvement. A number of initiatives help to do just that.

First, Safety: As S-World is part of a major organization, travelers can book without concern for false representation as assisted by the “per human results” search engine.

Second, the Agent Initiative: knowing the industry intimately, first-hand knowledge is a very important factor. High street travel agents and large travel agencies have staff who usually have never been to the country they are recommending, let alone the venue, and are usually offering the venue that offers the highest commissions. S-world travel seeks to recruit individuals from the towns that clients wish to visit. The system offers the venues, thus S-World travel reps and agents only need refine the clients’ choice.

Different representatives will be available to clients. For instance, if a group of fun-loving twenty something’s wishing a lively holiday, choose a “nearly made it” model or actor, it makes sense as they can recommend villa parties, lively beaches, advise on the best nights to go to clubs and indeed in most cases get themselves on the guest list. However if one wished a cultured holiday experience mixed with visiting some wine estates, the customer can choose a representative with similar interests.

Third, S-World 3D Virtual Representations: Simple photographs and write-ups rarely tell the whole story, especially if wide angle lenses are used. While one can be relatively sure a top-end hotel is fairly well represented, small hotels, guest houses and villas are not so particular.

By taking a walk through the venue, one ascertains the entertainment flow, size of the swimming pool, view from windows, indeed one could feasibly pick a particular room because of the view. Throughout the 3D walkthrough, icons are available that show real pictures and a collection of guest comments and general blurbs are available. The option to walk around the venue, seeing how far it is to local attractions, and indeed see what local attractions are available, is an influencing bonus.

How exactly is S-World going to map much of the world in 3D when Google has been trying for a year and has mapped only a very small proportion would be a fair question, the first key is simplicity, preferring to partner and use “The Simms” technology where an 8-year-old can design and furnish a house within twenty minutes is a good starting point.

The operation centers have a large staff contingent called “Spartans” who can assist. S-World travel representatives will render accommodation venues and local surroundings as their name will be attached. Some tourism boards will pay to be rendered alongside venues that wish a level-two representation. The largest factor however will be the gamers playing S-World UCS. All one needs is a pen laser and a camera and hey, presto, that street in “Call of Duty” is your street.

The same advantages presented in travel, also can be used in real estate, not that many people would ever buy a house they have not seen. However via the S-world representation they can eliminate properties that are not suitable. Knowing the industry well, it is strongly advised if a client is looking in a certain area, be it a specific town or general area, it’s best to see every house from every agent, maybe over a hundred, with a few hours on S-World and a task that less than 1% of people ever perform is achieved with ease.

Location, location, location is a major factor within the business plan, adding percentages to houses due to enhancing or detracting local features. It’s simple enough to attain the land registry document of houses sold in any area, which gives a baseline price for different house types, both in bedrooms and size, adding the location factors, and further tightens up an estimate. Add an agent’s personal opinion, where they are penalized for exaggerating and one has an accurate base line sale price.

For sellers that are not duly fussed over and coached, the sale price maybe 10% more as, purchasers will perform what is known as a love buy, based on their emotions only. On the other hand if a client is in a hurry to sell, they can price the property under the estimate. Banks and financial institutions selling a repossessed property can offer even lower prices, and in this case, one could see property moguls buying on the S-World representation alone. Once a critical mass of Real Estate is displayed on S-World, most would assume if a property was not represented, it was overpriced. Alongside suggested selling prices will be suggested prices for remodeling the property and upgrading where needed. 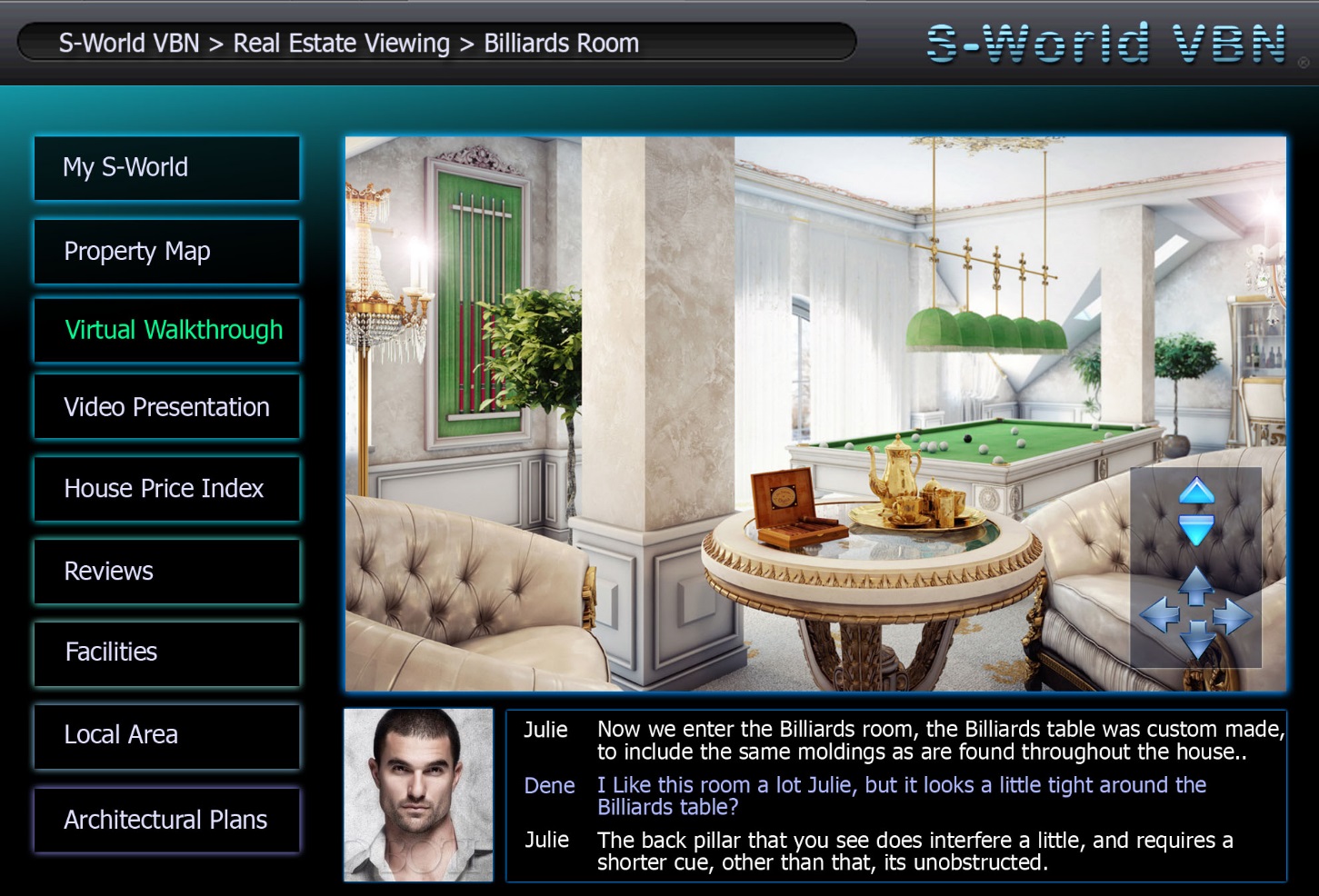