Before moving to the concluding chapter, to return to UCS in the following book’s, there is one bonus side effect of S-World UCS, which needs to be presented, and that is in its power to organize logistics for both the physical and practical creation of networks and the organization of the businesses and staff who will be entangled with them.

American Butterfly is a gigantic initiative, especially when considered globally, below we see the global network cube, seen in the mid 21st Century. Each cube representing 4,096 networks creating a total of 32,768 networks, a figure that could double when satellite networks are included.

Placing satellite networks a side, as each Mother network creates 15 Baby networks we divide 4,096 by 16 which gives us 256, which is the figure we have worked to thus far, remembering that the USA has two cubes and so actually creates 512 networks, but further remembering US mother networks are created in two phases, which is currently suggested to be two years apart. 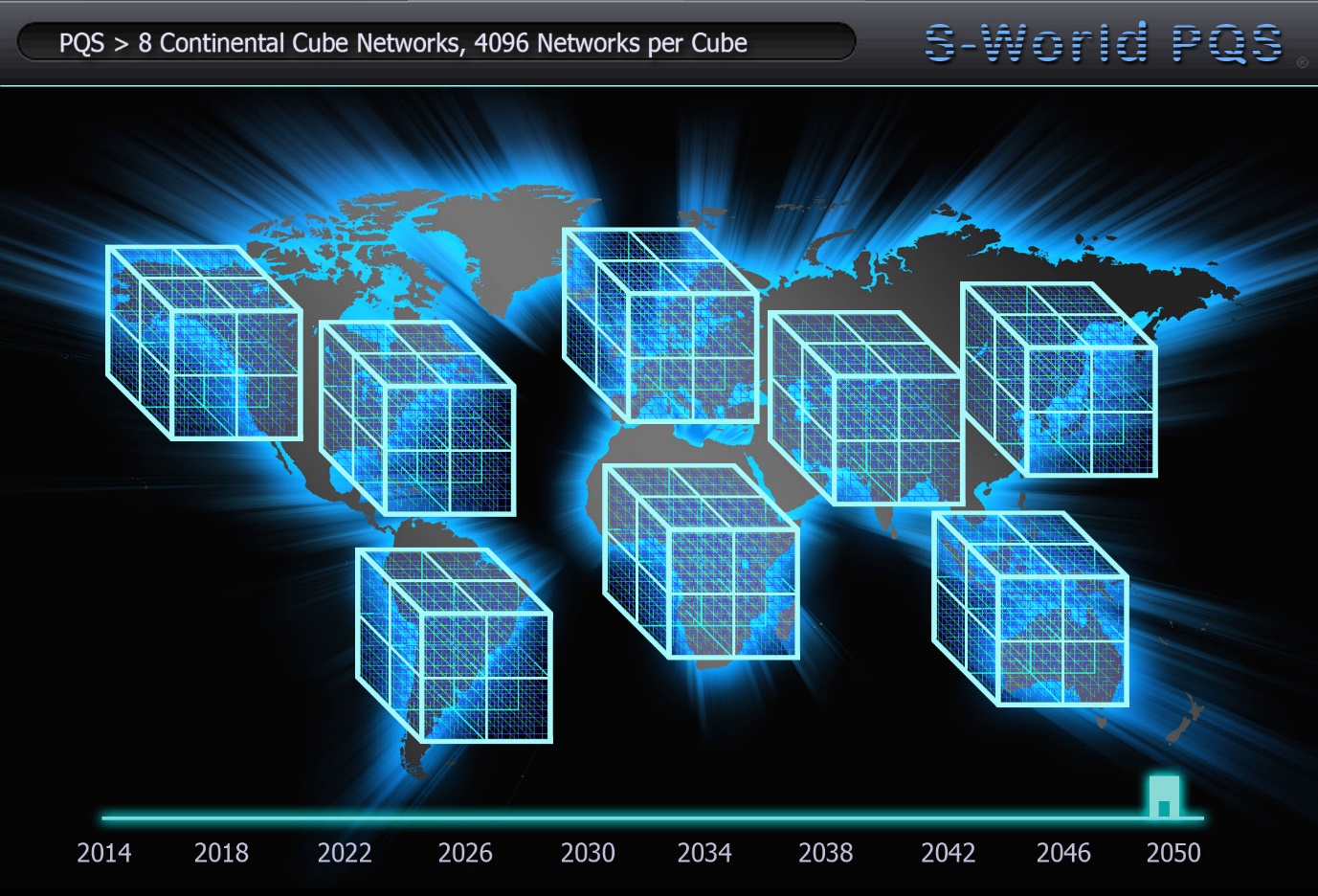 From a logistical perspective, it’s easier to conceptualize, when considered as ten Mother Networks per US state. 162 Below we return to the UCS Orlando Network map. This map accounts for all 512 US Mother Networks approximately ten per state, with the Orlando Network serving a catchment area if slightly above 6,000 square miles 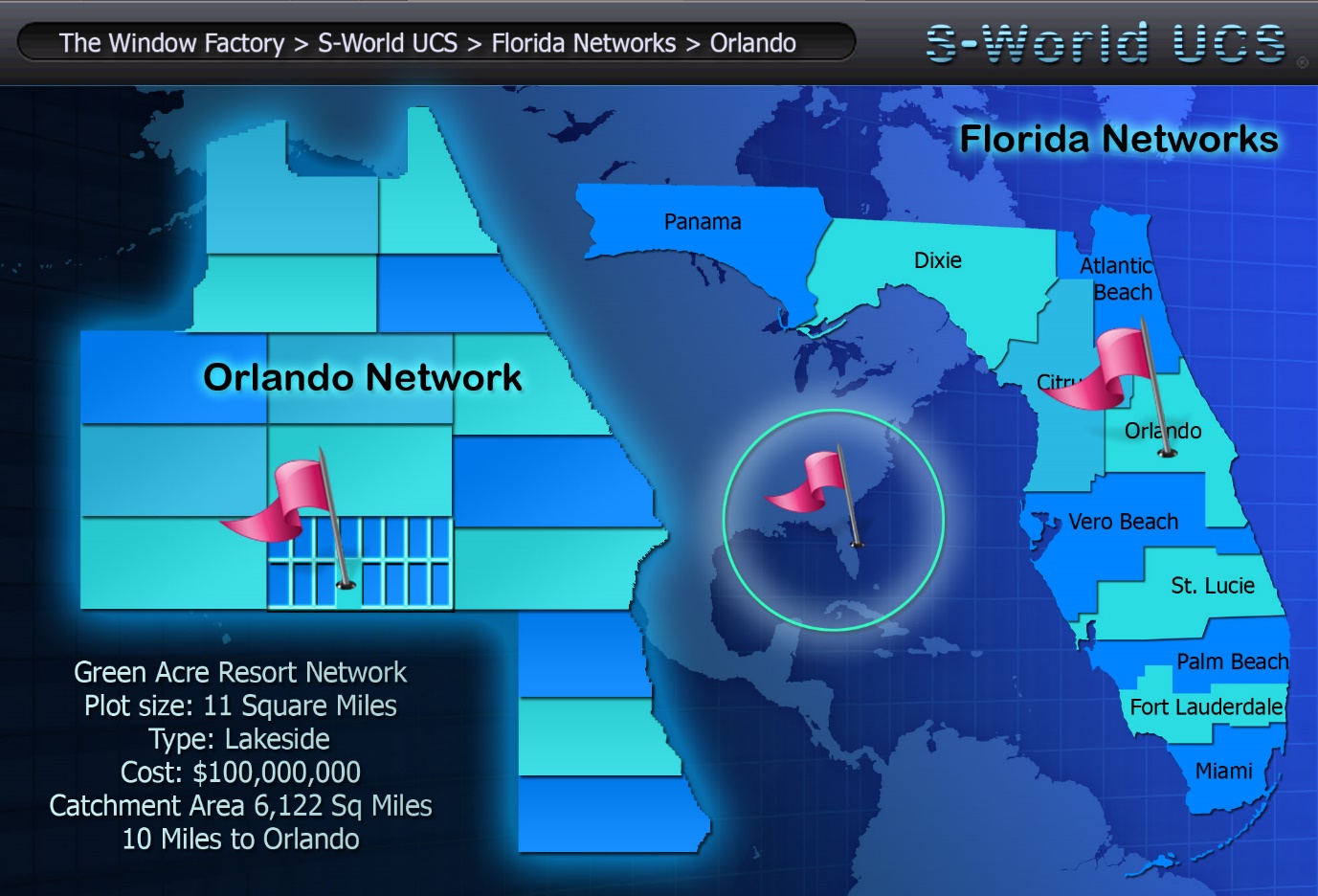 Within the close up of the Orland Network we find 16 relatively even lots at about 375 square miles each.
If we look closer in, we see within a further 16 sub divisions leading to rectangle squares of about 24 square miles, half of which would be a good sized site for a resort network. As such, given a clean canvas there would be 500 plots of land available.

Within which, one could expect between twenty and fifty potential sites, more if the desired rezoning of farmland directive is enacted, which in most cases will be a question for local authorities and residents.

IMPORTANT NOTE: it needs to be pointed out that the network building plans by 2050 are below the current stated requirement/plans. This is pointed out, as some pay protest at building in any form, regardless of ecological awareness, the point being, the properties are going to be built by someone, butter that someone does it in an ecologically responsible way, which enact benefits in many areas from medical initiatives to global cooling.

Considering we have between 20 and 50 potential sites for any mother network, and consider further that within the first phase Orland and Vero Beach would be twinned, now creating 40 to 100 genuine contenders for a Mother Network.
The beauty of UCS is that it the general public can join S-World UCS, or use the Facebook app to walk into S-World VSN, within which, any user can select a site to build a mother network and virtually start building, using the SIM CITY rendering software. As long one has an internet connection, there is nothing to stop anyone from building a virtual network.

The next step is to choose a network from all created so far, as an official contender, which will be done largely by public vote and some usage of e$. However, if a local council has made a concession on available land, such an organized gesture could well swing the vote.

Within a few months after launch, a contender for each of the possible places will be set, at which point, the simulation changes and people now choose to join one network or another, and business start to pop up, some imaginary, but some real, creating genuine trading partners and utilizing the business software as it is at that point. At this point it’s not utterly essential for a business to pick the correct location, as when the field thins, the businesses will have a choice of network to move to.

However, as enrolment in S-World gets more popular and there are more than the allowed 4,096 business bidding for 4,096 business sectors available, then some serious strategic thought as to which sector will likely be the Mother Network will be necessary, as only by being and trading in that network, is any company assured of inclusion in the first phase.

Of the possible 20 to 100 sectors, not all will be viable, hi priced areas, with already crowded infrastructure, may not be cooperative, however, it’s probable that at least 16 plots are found in suitable positions where the planning permission has been either approved, or the county has indicated it will not block the development under the ecological and aesthetic conditions that apply to all networks.

From 16, down to 8, down to 4, by which time, in most or even all states in the USA there is quite a frenzy over the last 4, which would all be granted future Network status.

Long before it gets to choosing the first network, the development plans would have been approved and far more businesses that can actually be launched in a Mother network will have been using the systems, already trading and ready to invest.

That’s how a logistical operation, far greater than any that has been performed to date, gets expedited within a year from the launch of S-World UCS, and if you’re wondering how long it will lake to create UCS, considering the foundation via S-Web are currently being developed, from the moment of substantial assistants from one of the big Tech companies, or The SIMS, we should have a working version in six to nine months.