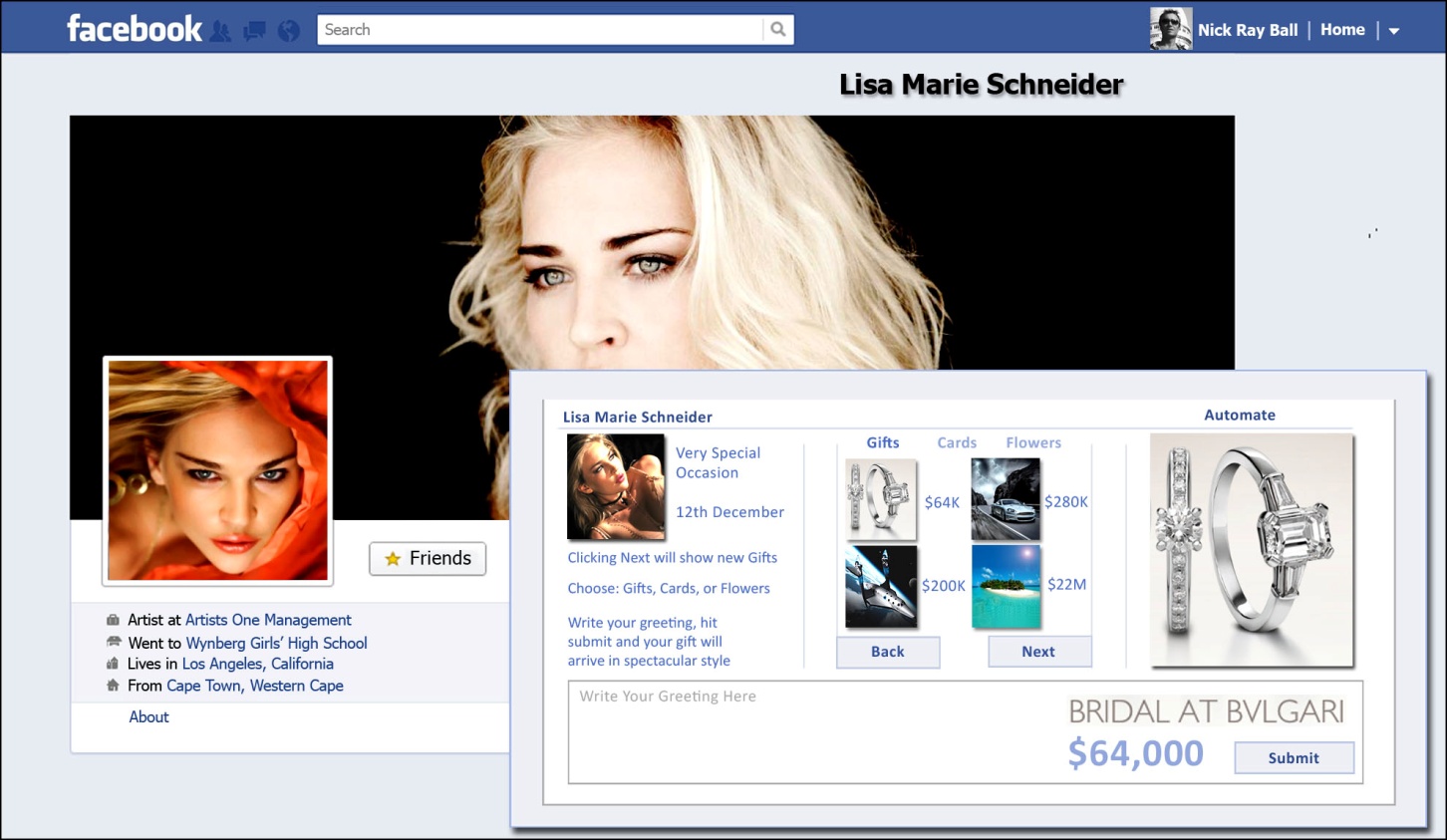 With over 40% of the worlds wealth held by the top 1% of people “Lx.” caters to that market.

Secondly the “GDP Buster” hi spends mark up initiative, which sees “Lx.” concierge applying a dedicated service representative organizing an individual or families purchasing needs, hi spenders in this category see “Lx.” Lowering their mark up to 2.5% where as the industry standard is 100%.

Service is provided in the form of the “Lx.” concierge agents and auxiliary logistics staff

Experience comes from the many S-World contingents and “Lx.” Lounge bar’s found within the resort networks. Plus of course Facebook is an experience in itself.

Exclusivity comes from membership, one would need to have a financial advisor or bank manager declare that the member is either in the top 1% or earners, or is in the top 1% of net worth individuals.

Exclusive shopping arrives in the form of the “if-you-have-to-ask-you-can’t- afford-it-range” selling items from Private Islands to Picasso Paintings.

The trick of course is to make the receiving of a “Lx.” gift a similar experience to opening a bottle of Dom Perignon Rose 1959 on a slick Super Yacht in St Tropez….

One can tell when the “Lx.” representative gets out of an Aston Martin, that it going to be special, you can tell from the look of the concierge representative it’s going to be stylish; the gift passes hands to excited eyes, and as the bows and ribbons are removed one see’s those magic two letters and the full stop “Lx.” And one knows whatever is inside will be special and the sender has style.
One can of course choose the delivery method, if subtly is required, subtlety will be received

Luxury goods and services have a new Mantra: “Lx.”

It’s a step up from Neiman’s and Saks Fifth Avenue and Gump’s.

Of course “Lx.” itself becomes a status symbol, as anyone who receives such a gift will know it is from the top one percentile of global earners or net worth holders, or at least as close as it can actually go beyond the reference of a financial advisors declaration so it would not be hard for the 2nd percentile to gain membership, alongside this would be siblings and parents.

Considering only 30% of the population use the internet, of which 45% are facebook members in the region of 5% of facebook users would fulfill the “Lx.” membership requirements, this equates to 54 Million members. If one in ten were to use “Lx.” to make a purchase as highlighted Facebook would generate just under $350 Billion in revenue.

Lastly on “Lx.”: One will note the branding does not include the name “Facebook”, despite the financial advantages, which in tern lead to great profit which equals great good. It is possible that Mark Zuckerberg and Facebook do not like the concept as it does not cater for all. Should this be the case a swap will be made with S-World for the business gift application as described in the forthcoming S-World financial section.

Due to the popularity of Facebook gifts with test subjects, it implementation opens the door for a full e-commerce service, selling top ranked items produced via the entire network, including big brand investors items.

It will not be an all encompassing service, whist all goods from Mountain Bikes to Airplanes are available only the top 10% of the “per human results search engine” rated goods and services will be available. This serves two purposes. Firstly it follows Steve Jobs business philosophy, “Deciding what not to include is as important as deciding what to do”.

On Steve’s return to Apple in 1997 a review of all the Mac computers was initiated, there were a dozen Macintoshes ranging from the 1400 to the 9600. When he asked the team the simple question “which one should I tell me friends to buy” no one could give a strait answer so he scraped 70% of the range. This process lead to Apple consolidating to just 4 machines: The Power Mac G3, The Power Book G3, the “iMac” and “The iBook”.

This action began the transition of a company on its knees on its journey to become the biggest company in the world.

Secondly limiting facebook to the top 10% of products allows room for the S-World Business network and other retail stores to compete without competing, as the balance of 90% of goods will be sold via those mediums.

For example consider TV Sets, Facebook Gifts and stores would only sell the top 4 ranges, maybe two brand names and two new brands, personal brand love varies from person to person, and just because a TV Manufacturer only received an 88% rating does not mean it’s not an excellent buy.

In the same manner as Facebook Gifts plus, “Lx.” concierge will offer an all encompassing service to members in a similar way to Amex Centurion, albeit additionally concentrating on retail, auctions, real estate, personal shopping and services alongside travel and general arrangements.