The “Hook” to S-World VSN is the “Teleport to GPS” function; it does not take a million ideas to make a great product, indeed often it is best to have just one, and then build the product around the idea. This notion is best summed up by Criss Cox VP of Facebook referencing the “tagging” idea as described in the introduction video within the Facebook careers community page.

“There were 20 great photos products around in 2005 that had millions of dollars in cash, that had hundreds of features, and here we came along with a handful of people and a month and a half and built a product that boiled down and removed all of those features, except for one thing, which was tagging it so that we organized photos on the web around people and it completely changed the experience. That was, just like that!”

The concept of S-World VSN is organizing people around where they are and where their friends are. 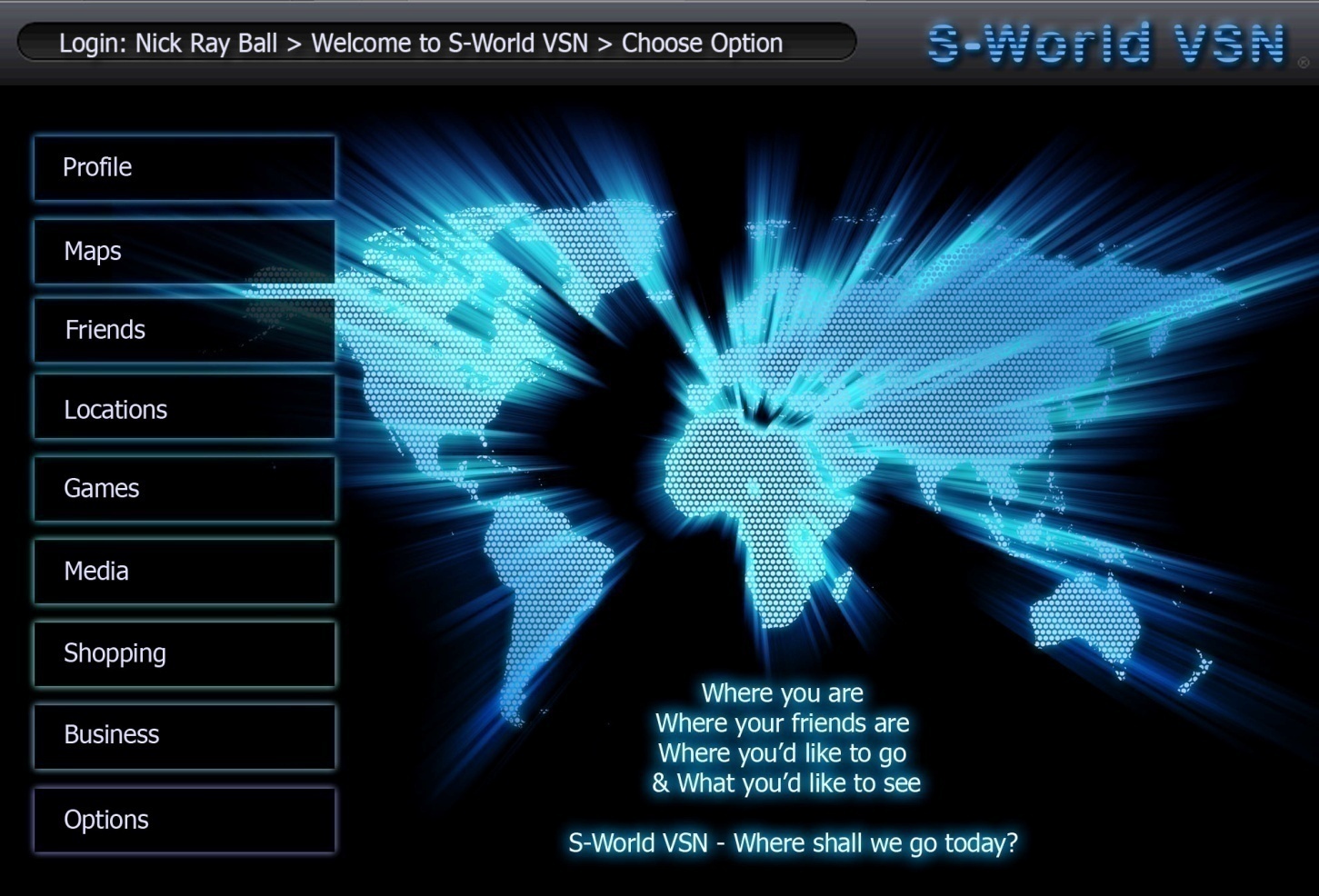 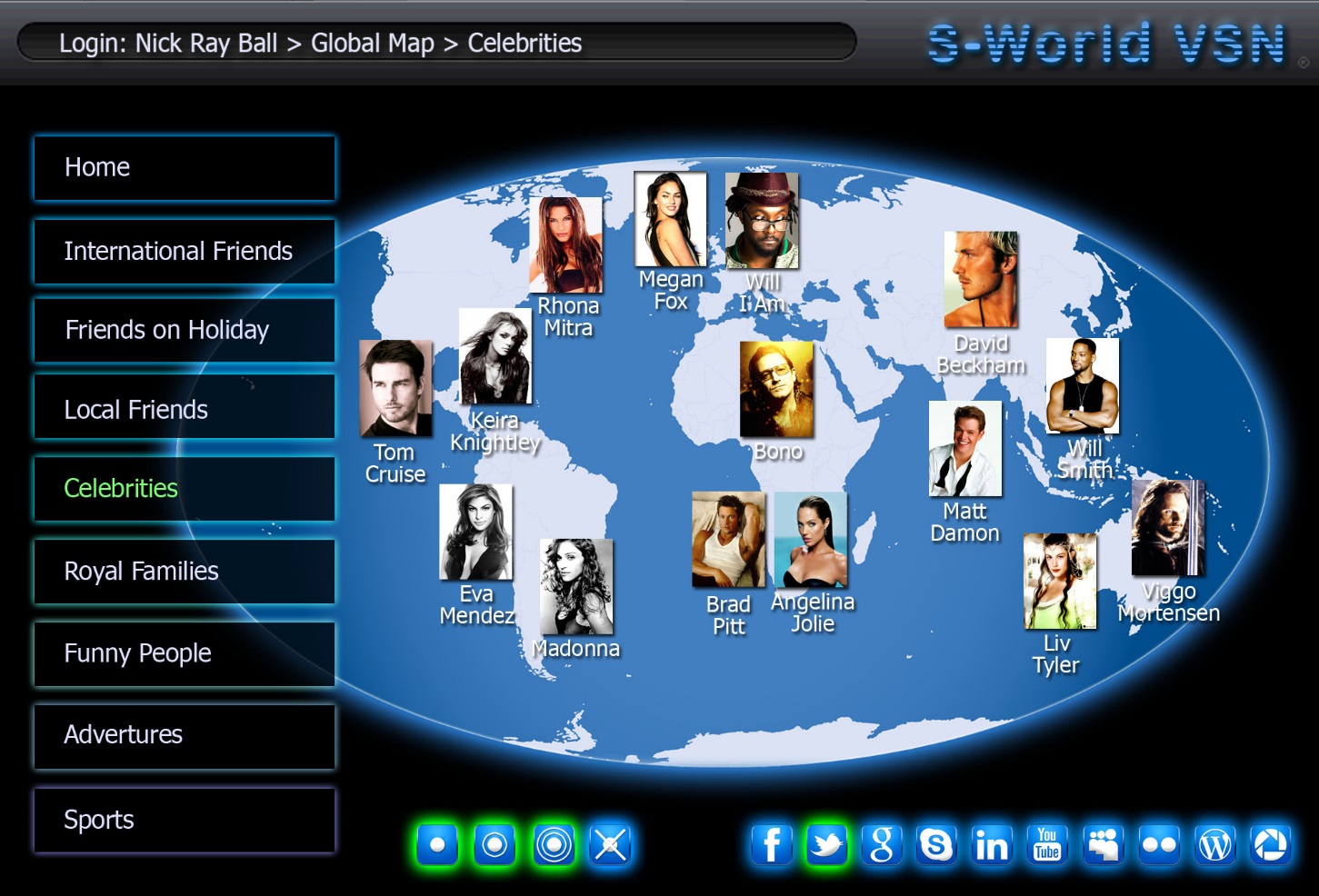 Once one has entered a site via the Maps Tab, a variety of options become available, this screenshot is specific to “Twitter.” Along the bottom right we can see 10 icons representing various social networks and photos products, as we can see the “Twitter” icon has been activated. The list of celebrities selected pops up on the screen in the various locations where they can be found at the time.

To the left of the Social Network options are the four locator buttons. These buttons select the type of GPS positioning available. The single dot represents an exact location, from which one can virtually teleport directly to the celebrity and see all that they can see, albeit a virtual representation.

The Dot with a single circle represents the locator accurate to 5 miles, indicating what town a celebrity is in but not their exact location. The single dot with two circles indicates a 20-mile approximation, highlighting the City or rough position within a county and the crossed out dot represented the locator is off and the last known or inputted position is indicated. 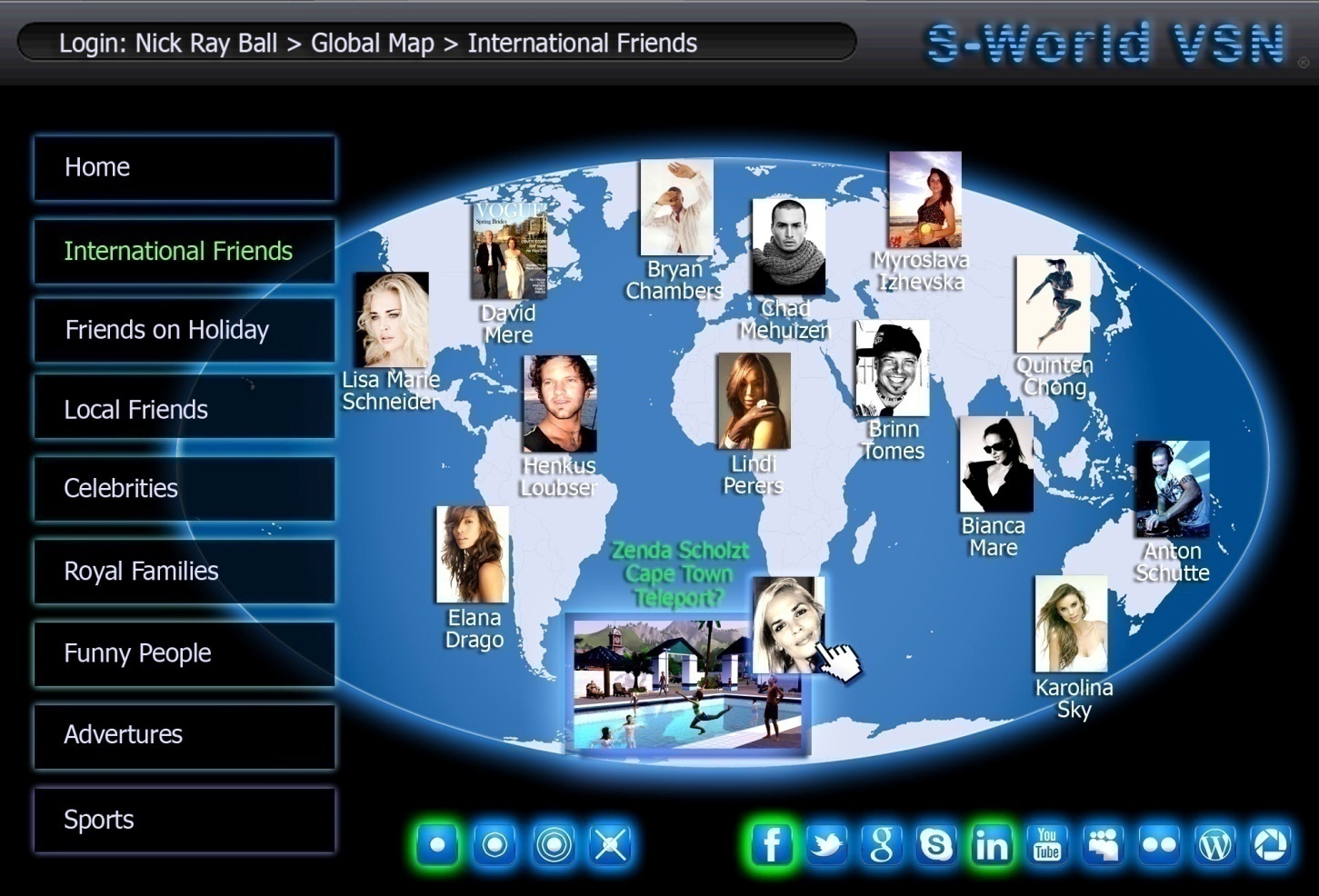 Please also notice within the Social Network options “Twitter” has been rendered inactive and both Facebook and LinkedIn are active, showing friends from both networks.

Centre bottom of the globe we see Zenda Scholtz, as the mouse runs over her picture; the virtual representation of where she is appears. In this case, Zenda is at a pool party. She could equally be on the beach, on Table Mountain, at a Safari, visiting the local vineyards or considering trying the world’s highest Bungee jump.

Clicking on Zenda’s photograph enables the “Teleport to GPS” function. 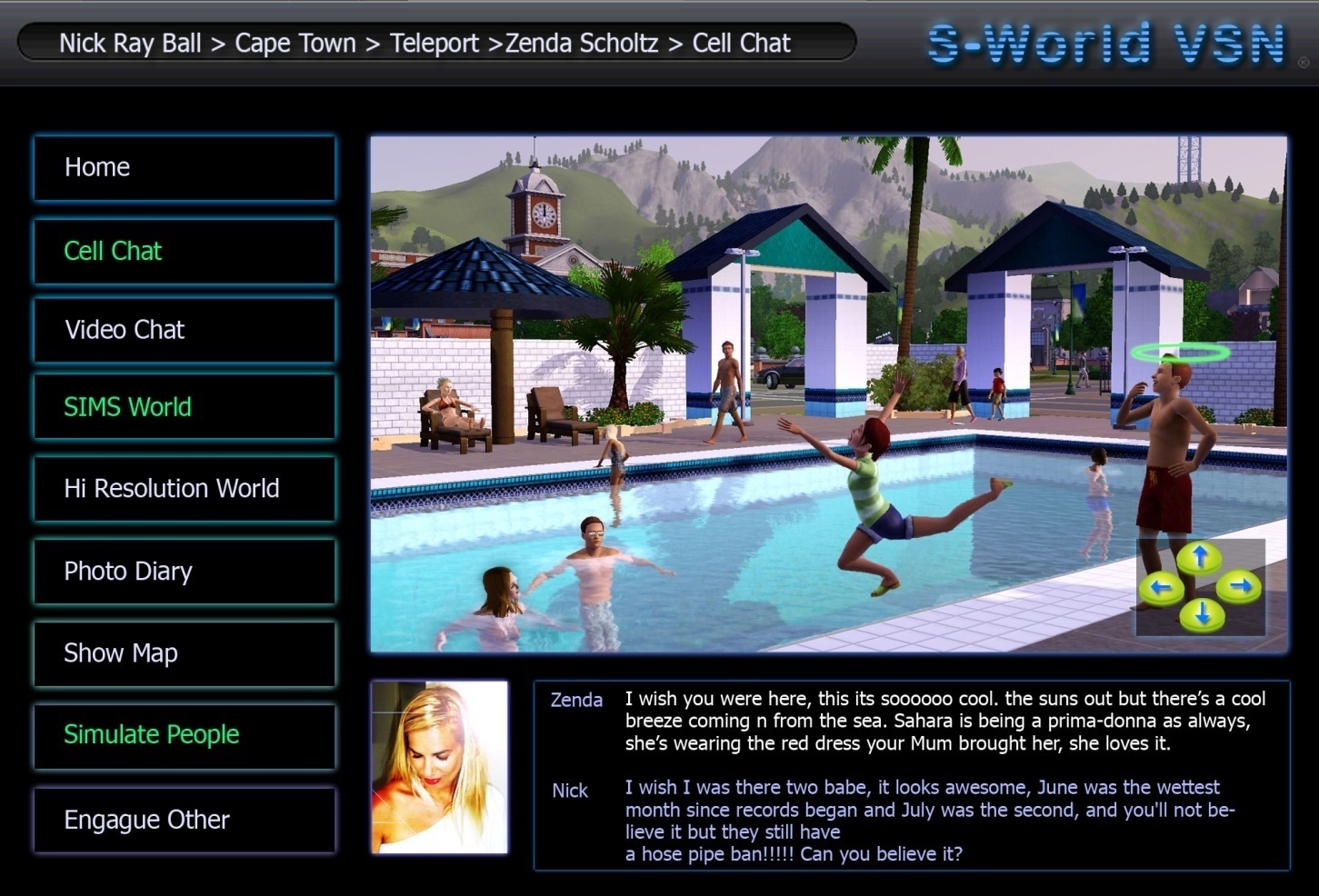 After we have “Teleported” to Zenda’s Location, we can “walk around” and see all there is to see using the green buttons found on the bottom right of the screen.

The rendering you see is the “SIMS Basic” mode; however, at the click of a button, if available, a Hi Resolution version can be displayed.

Please notice the “Simulate People” menu button is green, so the system has simulated people having fun around Zenda. On this topic please note the green halo over the male figure above the green buttons, which indicates a real person, to whom one can initiate a conversation via the “Engage Other” button.

The Show Map function is a local highlights map, which one can follow.

The Photo diary option allows the observer to follow Zenda’s movements throughout the day, orientated by the photographs she has taken on her journey

Skipping back to our “Celebrities on Twitter” page, it is easy to see how the twitter experience is boosted by not only receiving the tweets in the text box, but also seeing where the tweeter is and has been.

S-World TV has a number of components. First we shall see how it interacts with S-World VSN, and look back to the example made in July 2011 within the Facebook Product presentation for Criss Cox, which details a day out with U2.

In this example we examine interaction from the virtual world with real life footage, in the form of an S-world TV camera crew spending the day with U2 prior to their concert in Green Point World Cup Stadium, Cape Town.

Partly due to promotion, partly as they like to interact with their fans, but primarily because Bono wishes to raise money for the residents of the Mandela Park Township, U2 agreed to spend the day before the concert in S-World VSN interactive mode. They turn their cell phone VSN locators to exact positioning and allow a small film team to follow their movements, with one camera filming the band and two others taking artistic shots of the location and scenery.

After breakfast, U2 takes a 20-minute boat ride to Robben Island, where Nelson Mandela was incarcerated in the Apartheid years before being released to become president. Bono has a few words to say upon arrival at Nelson’s actual cell and the band members chat and discuss the journey. At any time one can click on the “more info” button and bring up documentary footage about Robin Island, Nelson Mandela, or Apartheid history.

After 90 minutes and an amusing incident with a penguin, it’s back to the mainland and the decision as whether to walk or get the cable car to the top of Table Mountain. Partly out of curiosity and in part as a collection of S-World, viewers have some pledged money if Larry Mullen takes a walk. Larry walks while the rest of the band takes the cable car. This works perfectly for the S-World film crew, because it provides more entertainment for VSN viewers as they have two focal points: Bono, The Edge and Adam in the cable car. Shortly after taking in the view, and possibly having a drink, viewers watch as Larry tackles Platteklip Gorge.

There is a certain camaraderie that comes with climbing Platteklip Gorge, and it would not be a surprise to find Larry bonding with his camera-carrying counterparts which makes for a much better one-to-one S-World VSN experience, particularly as they chat away on the frequent rest breaks that come between the continuous and unrelenting track up to the top. Larry has the opportunity to talk face to face with his sponsors, which of course makes for more interest and so brings more donations. For some it takes 45 minutes, the average time being two hours. Larry and the S-World crew made it in 90 minutes, which is a noteworthy time, and the $10,000 or so Larry has raised will undoubtedly assist the residents of “The Mandela Park” township.

At any time, S-World VSN viewers can switch between actual footage of their journey and the virtual view. Once the band is reunited, it’s on to the next leg of their journey, which is to the Mandela Park Township, 10 miles as the crow flies, 45 minutes via cable car then road, or two and a half hours on foot, going down from Table Mountain across the 12 Apostles down to Constantia Nek. So out come the cell phones and the band watch a 5-minute virtual journey of the more adventurous route. Two and a half hours down is a lot easier than 90 minutes going up, so the band, including Larry who has now reached hero status with those following his day, all take the scenic trail to Constantia Nek before heading into Hout Bay and the Mandela Park Township.

Once at the township all the band members go into interactive mode, choosing to speak to various VSN viewers regarding the township as they walk around and meet the largely Malawian and Zimbabwean population who, despite their living conditions, are extraordinarily upbeat and for the most part happy. During this process the charity drive is increased and by the time they leave, fifty thousand dollars or so has been raised for the residents. Now it’s back to the hotel and on to the concert.

During the concert, one can simply choose to watch it in standard TV mode, or interact with the audience who are periodically being interviewed. If one knows someone in the audience, one can request they go to a VSN camera for a live chat. Alongside this, one can choose to view the concert from any specific TV camera, swooping from different angles at will. Lastly, each person who uses VSN has an Avatar that can appear on screen, either a simulation of themselves, or an animal or indeed anything one may care to be. The avatar can go wherever it wishes; for example, if the avatar happens to be a kangaroo, the option to jump on stage and bounce around with Bono and the band during the concert is available.

All told this is a significantly enhanced experience compared simply to watching the concert on TV.